Home Poker What Are the Best Poker Hands?

What Are the Best Poker Hands? 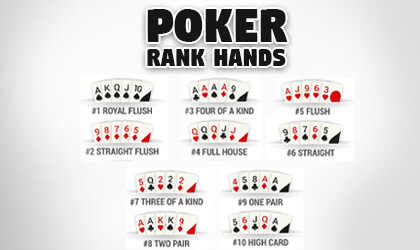 To some, Poker is a game of style, finesse, grandeur, and great exploits, to others, it’s just a card game, while to the experts, it’s a game they must win. Poker appeals to many people in different forms, however, to become successful in poker, a player must master the best poker hands if he or she is to have an upper hand on the table.

Strongest Poker Hands to The Weakest

The royal flush sits pretty at the top of the pecking order for the strongest poker hands. To earn a royal flush, the player must possess 5 consecutive cards detailed in the same suit in order of value beginning from 10 and ending at Ace.

If you have a situation where five cards in sequence are in the same suit but don’t amount to a royal flush, then that should be regarded as a straight flush. And the only poker hand that can beat the straight flush is the royal flush or another straight flush alongside cards with higher ranks.

In this type of poker hand, you have a situation where the same card is in all four suits. The five-card hand is made up of the highest card in your hand or on the poker table.

The full house comes in at fourth place in the order of strength. To have a full house poker hand, the player must be in possession of the same value card in three separate suits (also known as three of a kind), and a different pair of the same card rank in two separate suits.

In a situation where at a game’s end different players have a full house, then the outcome of the game will be determined by seeking the player with the highest value three of a kind winning hand.

According to the hierarchy of strength, a flush is ranked fifth. Having a flush occurs when a player has five cards of the same suit in any sequence. Situations often arise where more than one player has flushed, if this happens, the game will be decided by determining the flush that features the highest value card.

If the player with the highest value card is ascertained, this player will be deemed as the one with the winning poker hand.

In a situation where the value of the numbers on the five cards are in sequence, for example, different suits having 3,4.5,6,7 as their numerical values, this will be deemed as a “straight poker hand.” Note that an Ace can either rank above a king (either high) or below a 2 (low), however, they can’t rank on the same hand.

As the name suggests, three of a kind refers to a poker hand with three cards of the same suit. When two cards with the greatest value are immediately next to the three of a kind, the hand is finished.

In the two pairs of poker hands, there are two separate sets of cards of identical rank. The game is determined by the remaining card, if the remaining card is the highest ranked then the hand will be deemed completed.

The pair poker hand is a situation where the player has a pair of cards that are of the same rank in separate suits. Then a culmination of the three highest-ranked cards makes up the remaining hand.

The high card is the weakest or lowest-ranked poker hand in order of strength. And when you have the highest card at hand it is regarded as your ‘best hand’. How to Play Poker?

Playing poker is relatively easy to play, however, there are different types of poker with different playing strategies. There are three basic phases to playing poker that we’ll cover in this post.

1. Identity what you need:

Playing poker needs a few of these requirements:

In the game of Poker, they are words that differ and there are words that are similar. If you look at this context you will be able to analyse the importance of the language of Poker.

Ante: The word Ante refers to the initial amount of money players are required to put into the game of poker, and the monetary value is usually small if their wish is to be dealt into the game.

Fold: Players call this when they want to get out of a hand, all they need to do is to toss their cards away. During the game, this might happen at any stage.

Check: This is a bit difficult to call, however, if you’re faced with the dilemma of not having a good hand, you can manoeuvre your way to another round without any expenses.

Other examples include Call, Raise, Capped Betting, and Bluff.

Just as we explained earlier by outlining the various forms of poker hands, mastery of these hands will give you an insight into how to play poker appropriately.

There are so many online Poker websites in Singapore at the moment, however, BK8 Singapore stands out amongst them as they are not only professionally exceptional in their dealings with players, but they have every type of poker game type you can think of on their platform. Also, players who play on BK8 Singapore are entitled to bonuses and rewards that far supersedes what other poker websites are offering.

In the game of Poker, the best hand is the Royal Flush.

A straight flush is when all 5 cards in your hand form a sequence but not in any order or suit, for example, 7-8-9-10-Jack (all of these cards belong to one suit).

Four of a kind means that you have 4 cards with the same value, such as 4 Jacks with another random card.

A pair means that you have two same value cards such as 2 Jacks with an additional 3rd card in another suit.